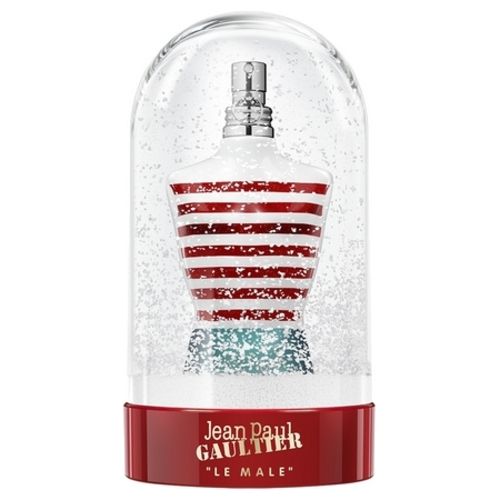 Le Mâle by Jean Paul Gaultier is an essential fragrance that almost all men have had in their bathroom. Its cult scent was born in 1995 and the notoriety of this juice continues from season to season. Its lavender breath is a staple in men’s perfumery. What’s more, Jean Paul Gaultier has the art of regularly sublimating the bottle with his perfume and letting his creativity speak for itself. This time, he decided to transform The Male into a sort of Santa Claus… Focus on The Male Snow Globe .

The retro spirit of Le Mâle by Jean Paul Gaultier

Le Mâle by Jean Paul Gaultier is a fragrance designed to take us back to our childhood memories. Moreover, it is indeed its little retro side that makes it an essence very popular with men … Le Mâle is an authentic perfume that has an odor similar to that of the shaving soap of yesteryear. At the same time, its design is now inspired by a snow globe. This little gadget, emblematic of the Christmas period, immediately plunges us into the heart of our fondest memories. After all, as a child, have you never shaken these kind of small transparent balls to see a multitude of flakes appear in them? However, it is precisely this touch of nostalgia that Jean Paul Gaultier’s Le Mâle Boule à Neige offers us.

The unchanged fragrance of the Male

If this fragrance is absolutely surprising in terms of design, it has retained the fragrance of the original Male. Thus, Le Mâle Boule à Neige sets off on a fresh and sparkling scent of mint, bergamot and orange blossom. Again, this is a nod to the period of childhood. The Snow Globe Male smells of mint diabolo. Then, lavender , a major ingredient in this product, comes into play. It is she who gives this perfume its typical barber soap scent. It is associated with mugwort and the whole is also spiced with spices. Cardamom, cinnamon and cumin enhance all the impertinence of this fragrance. Its base nevertheless becomes more tender and enveloping. The Snow Globe Male ends with vanilla, musk, cedar and sandalwood.

The new design of the Male by Gaultier Boule à Neige

So, let’s take a closer look at what the new Male Snowball bottle looks like… The iconic male bust by Jean Paul Gaultier this time rests on a red base. After all, what shade more iconic than this one to evoke Christmas? Likewise, Jean Paul Gaultier’s striped sweater is this time available in a duo of red and white. The whole is covered by a thick transparent glass bell. You just have to turn this bottle upside down to see a multitude of flakes seize the famous bust of Jean Paul Gaultier.